Larry Risko was one of my Manhattan art students in 1983. I taught retouching, when it was an art done by hand instead of via computer. At that time, I was a life-long fine artist who had been a professional retoucher for seven years, and I was  27 years old. Larry, almost five years younger than me, carried an impressive portfolio of his drawings that made me think, "Here is a child-prodigy!"
The 23-year old Mr. Risko was charming, courteous, unassuming and humble, with the face of a Sistine Chapel cherub, looking very much like British actor David Yelland as the Prince of Wales in Chariots of Fire. Larry, a Parsons School of Design student, learned retouching so quickly that in very little time he was expanding his professional art horizons, and almost thirty years later is at the top of the digital and hand-retouching field in the world's toughest work-environment, New York City. I quit the discipline when it went digital, and had  already moved into art restoration, but Larry went with the flow of technology and excelled, as ever. As I had done many years before, the talented Larry Risko figured out a way to make his own luck as an artist in New York: he learned a skill that was always useful in commercial  art and advertising. Larry's older brother, Robert, became a cartoonist-illustrator for the New Yorker and Vanity Fair magazines, and it seemed to the equally-gifted Larry that one Risko in that line of work was all that NYC could handle.  Back in the 1980s, the world outside Manhattan had practically no idea that retouchers such as ourselves existed; our numbers were few and we didn't have to look for work....
Larry bought his Chelsea apartment on 23rd St. in the 1990s for around $70,000.00. Having undergone extensive renovation, it is now a testament  to Larry Risko's keen eye for good design and real flair for executing his vision. A sensitive artist can be driven to distraction by surroundings that do not meet his or her aesthetic standards. Instead, Larry was spurred to action. He set about renovating his apartment with verve and vigor. The end result was so stunning that Larry's Manhattan co-op was featured in a 2008 show  on Home and Garden TV (HGTV).
New York City's Borough of Manhattan, mighty hub of finance, fashion and advertising,  is a tiny island which contains some of the world's highest-priced real estate. Square footage is always at a premium, borough-wide. Making the most of a small space is a requisite for inhabitants of Manhattan, especially those free-lance artists who must work at home. I had a good deal of experience at this, but when I saw what Larry Risko did single-handed with his apartment renovation, I was floored. Larry's personal urban renewal project included not only walls, ceilings and mouldings, but also floors, fixtures and furniture. Wonderful job of work, Larry!
©M-J de Mesterton 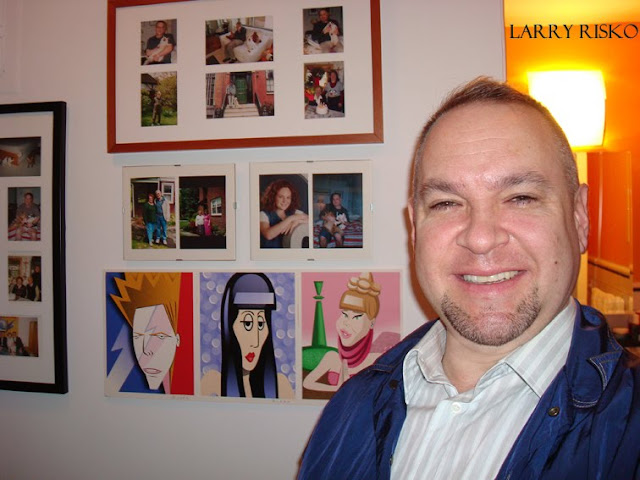 Larry Risko with Photos of Friends and Family, Some of His Brother Robert's Caricatures--
and a Large Light-Bulb above Larry's Head, Symbolizing a Brain Chock-Full of Ideas!

Larry Risko has been creating eye-pleasing images all his life, and making  the work of others look perfectly divine through his retouching skills. A few years ago, as a professional artist, Larry embarked on the biggest retouching job of his life: his Manhattan co-op apartment. Below are some before and after photographs of Larry's restoration and renovation project. 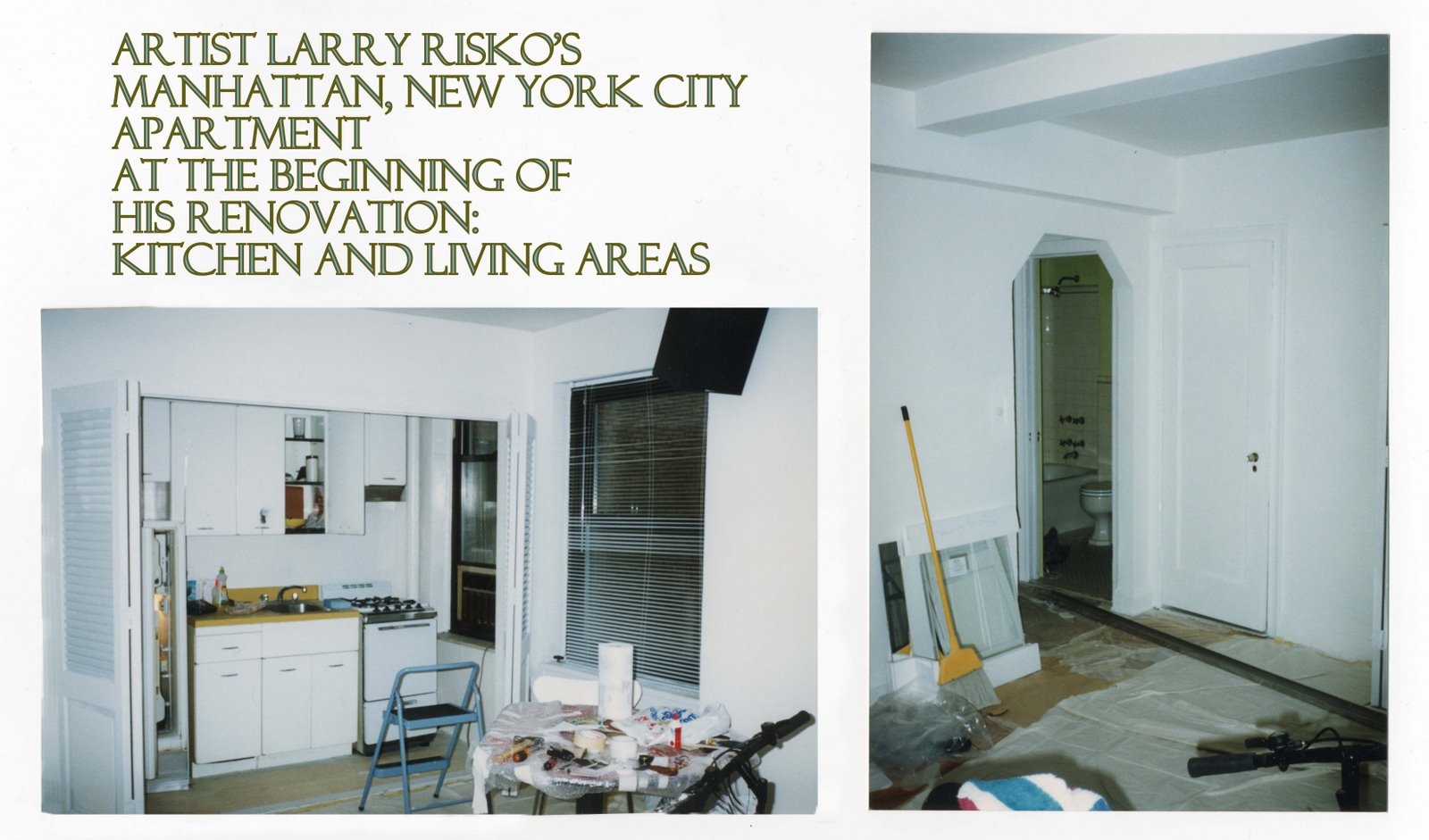 Larry Risko's inspiration for his kitchen renovation was the tropical island of Hawai'i, where he and his partner Robert enjoy the sunshine and brilliant blue water. The elegant little kitchen has a  stainless gas stove, a top choice of chefs everywhere; a sleek stainless steel refrigerator, and a stainless steel sink. The kitchen floor is coated with Eurothane Lacquer and finished with a high gloss. Larry's clean scheme would  be appreciated in Stockholm and Helsinki, perhaps even in Japan, where the designs are simple and pure in the well-established modernist idiom. This Chelsea neighborhood kitchen is now perfect down to the tiniest detail--what a transformation! 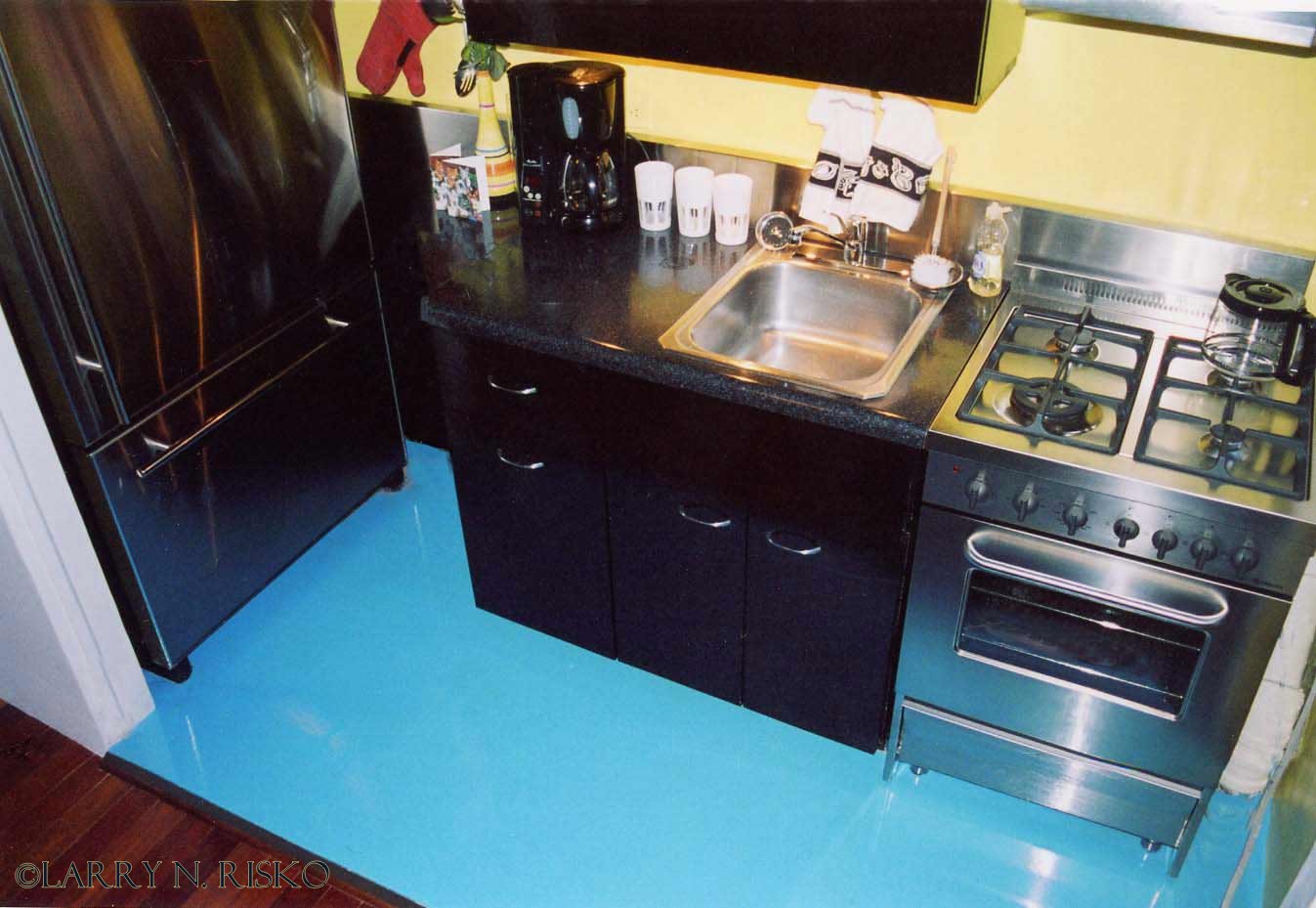 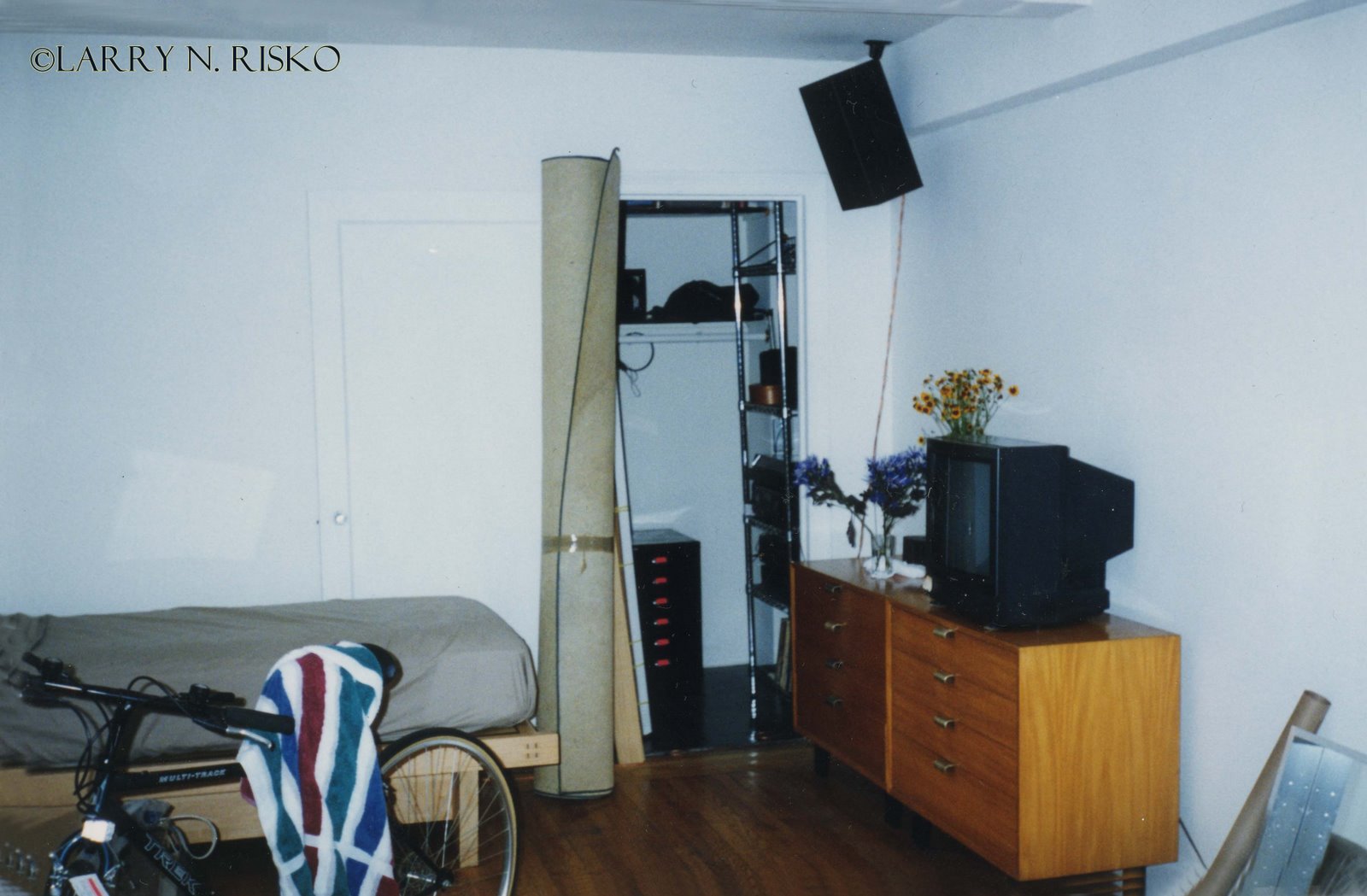 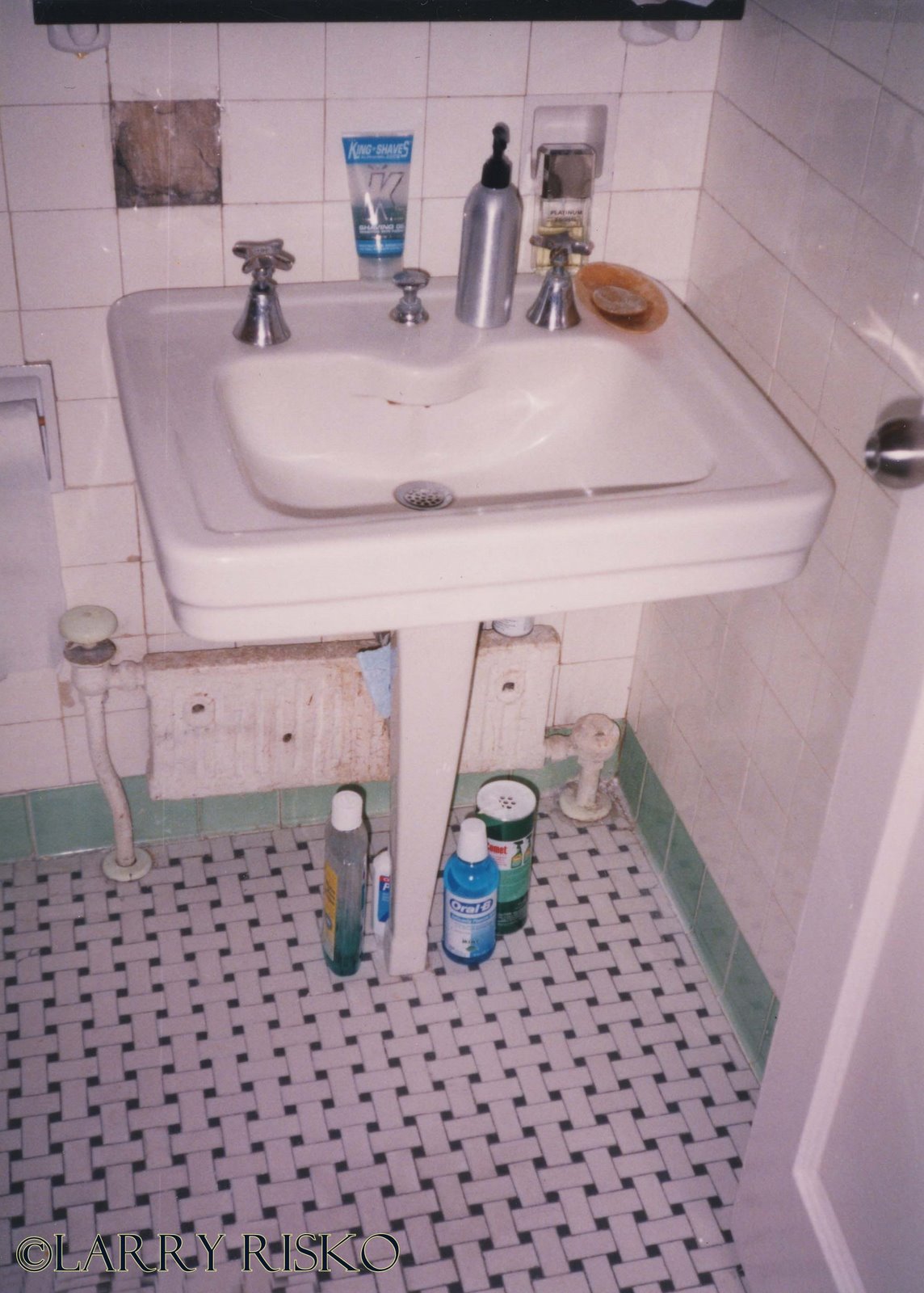 Above: Larry's Computer Room and Bathroom, Before Renovation 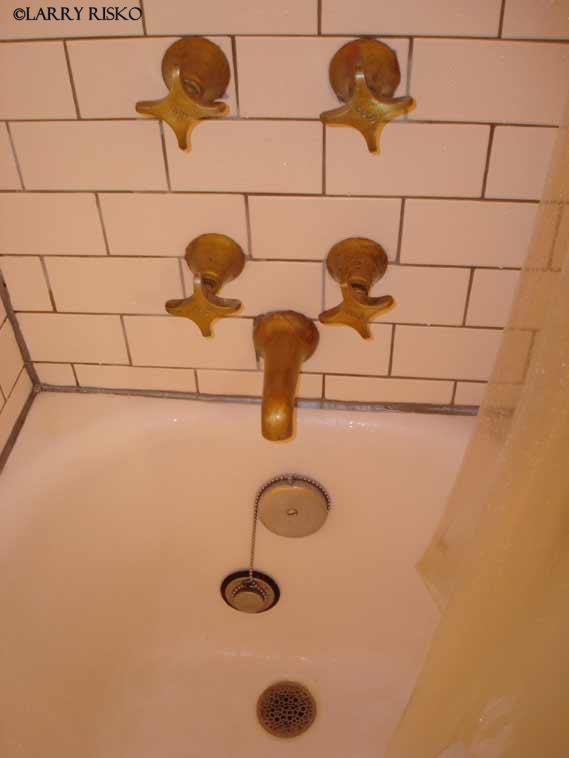 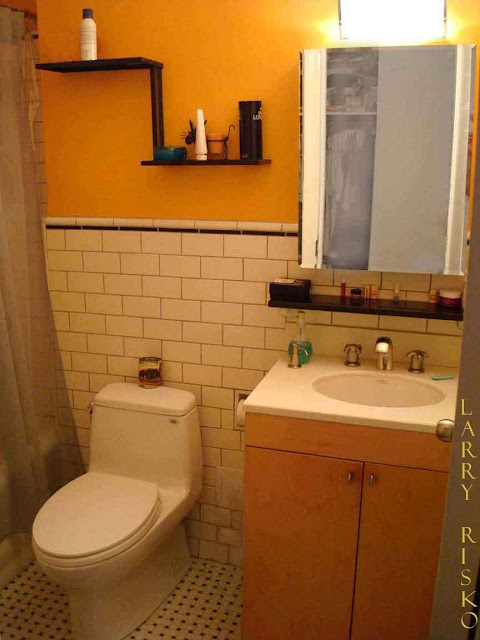 The walls in the apartment are all hand-plastered and primed.


Larry's dining table is a large piece of highly polished white Calacatta marble which sits on a Knoll base. The two white leather chairs are by Eero Saarinen. 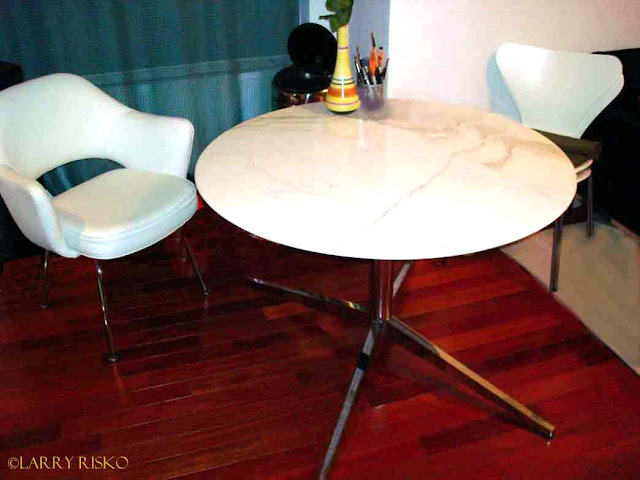 Larry Risko has excellent taste in textiles and furniture. A classic, small and white Eero Saarinen table sits near the luminous corner, in perfect proportion to the room. The black sofa is Florence Knoll's timeless 1954 design, which you will see with its new beige Alaska Beluga leather upholstery by Spinneybeck Leather, in the next photograph. 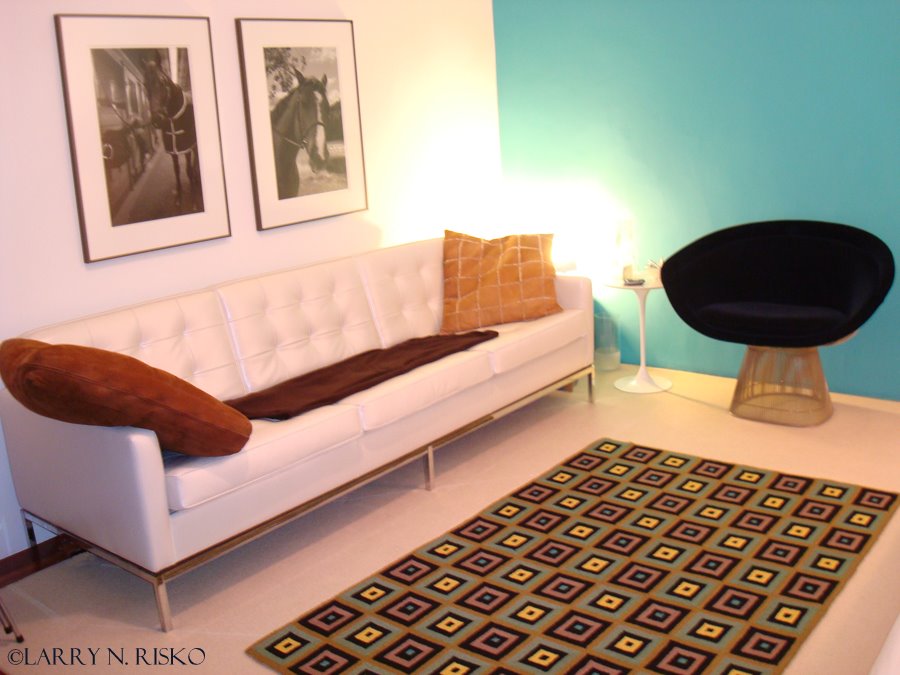 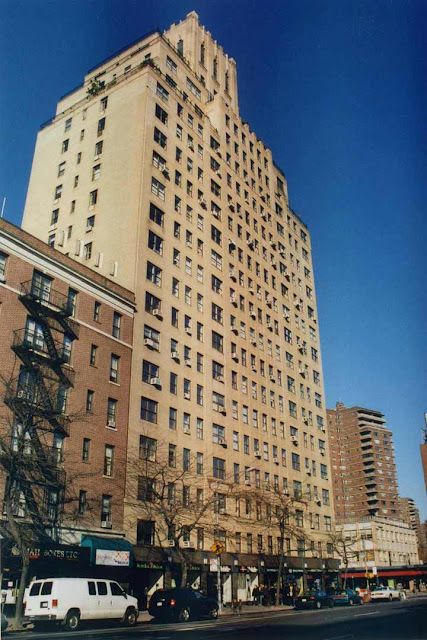 From Larry himself: "One of my building...and a shot of my foyer with a resin-sliding closet door, that I built with a drawer-slide...very inexpensive, $25!    A lot of German-made hardware to do this costs in the hundreds!" 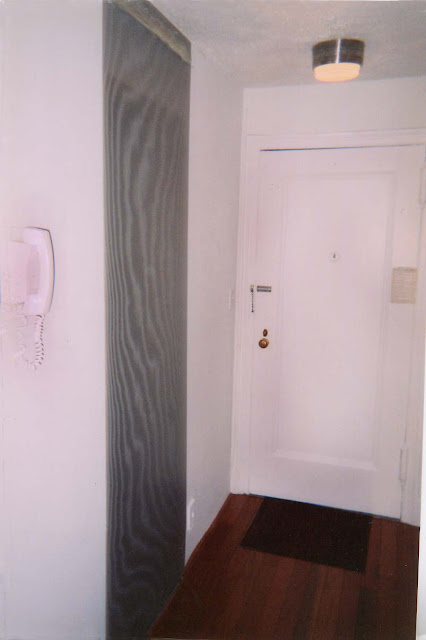 Larry and his apartment were deservedly featured in the New York City segment of an HGTV show. There is a lot of beauty to see wherever Larry Risko applies his deft hand and finely-honed talent for design.
©M-J de Mesterton, July 2010 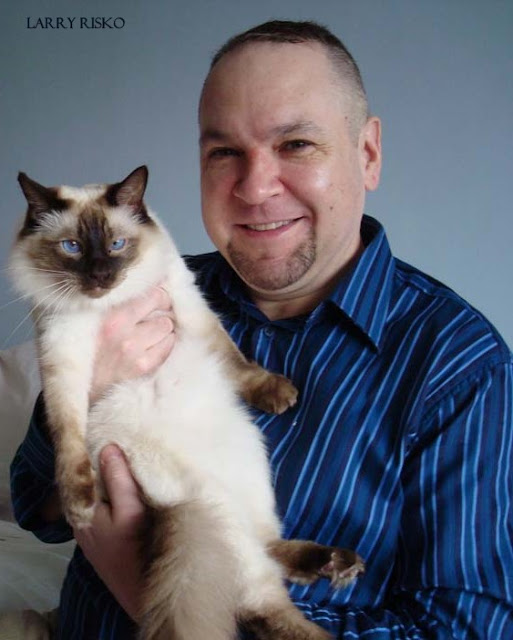 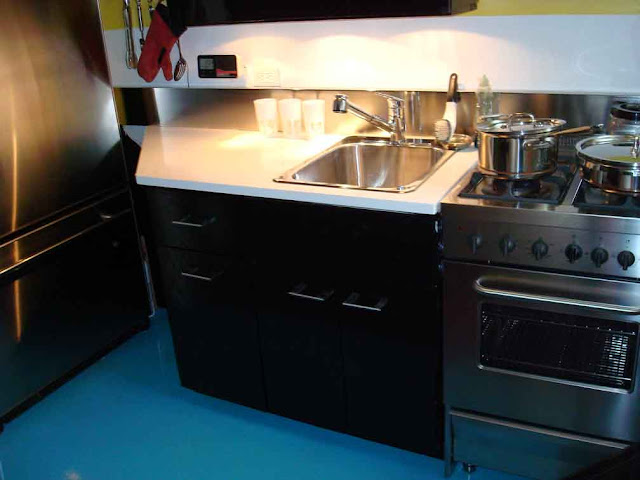 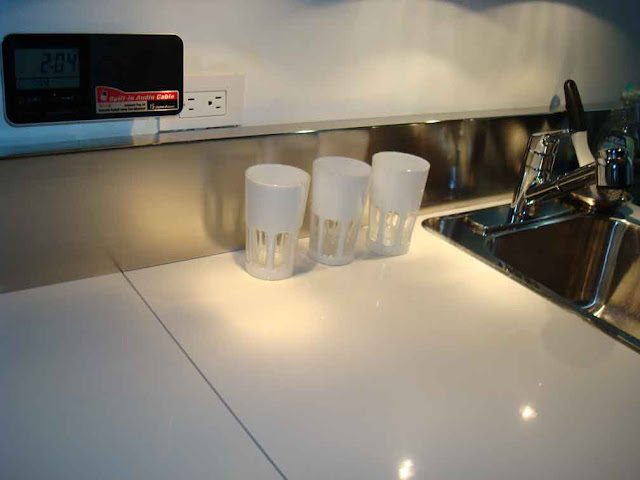